I love the holiday season. It’s a great time to look back on the previous year and think about all we have accomplished. We get to spend more time with our family and friends celebrating the season and making rich new holiday memories.

Unfortunately those memories are often accompanied by buffets of rich food, decadent desserts, holiday parties and lavish luncheons. Pair that with the lack of time for anything that resembles physical activity and we will all gain a few unwanted pounds during this season. Which leads to the next very predictable tradition … New Year’s Resolutions.

Just before I and my team broke for the holidays, I overheard a co-working trying to convince a peer that she should consider training for a 5K that was going to be taking place in April. Wanting to be supportive, I joined in the conversation and in no time at all we had forged the classic “If You Do It, I’ll Do It” challenge. As we continued to discuss how we could get ready for this event our co-worker, who clearly does this a lot more often than us said, “there’s an app that will train for you for a 5K!”

Now I’m a technology guy, which includes the on-again-off-again use of Nike+ applications for training but it had never occurred to me to find an app that included an actual PLAN for training you to go from the Couch to Running a 5K. 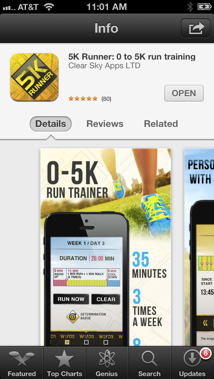 This week I’ve started using this app to get ready for the 5 K in April. I’ve only completed two of the prescribed workouts so far, but can say that the app and the workouts it includes are very well designed. During the workout the app tells you when to start running and when to walk. It’s goal is to safely build you up over time to running the full 5 k. The company that makes this application, makes other as well which include: 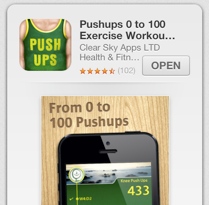 And another that promises to build you up from 0 to 200 Situps.

So I’ve decided that while I’m doing the 0 to 5 K Program why not incorporate the other apps for push ups and sit ups as well and use a total fitness program completely driven by my iPhone. I’ll document my results here on Kofacts.com to see if these applications are effective. Are there other apps that I should consider adding to my training program?

Hopefully, I don’t come to loath my phone when it reminds me that I’ve got one more set to do.