I suppose my absence from writing, and the subsequent abandonment of the C25K series could have lead a reader to believe that perhaps I’d given up on my pursuit of completing a 5k race; it would be logical to assume so.  But my absence was not cause by the abandonment of the goal but instead on the need to more carefully focus on it; which allowed me to train and prepare in a more targeted way.

Ultimately I completed a 5k, but of course not the one I’d originally intended.  As I previously wrote, I was in the final stages of preparing for a 5K in April when my ankle exploded in pain through the recurrence of gout just 6 days before race day.  Ultimately I was unable to compete in the schedule race and instead was forced to admit that it was time to seek medical assistance for this dreadfully painful condition.  I was despondent that I could not compete in the race that I had trained for.

But just like the quote which I frequently reference to family and friends, “If you fall seven times you must rise eight.”

By consulting my doctor, he placed me on a new daily medication regimen that once stabilized literally provided a stronger foundation to build my running on top of.  Once I started moving I needed a target and with my friend Douglas Stewart identified the Triangle Komen Race for the Cure on June 8th.  And as we are both inherently social animals we set off to create two teams, one from my company and one from his.  The friends who joined me on the race  did a tremendous job motivating my training as I could see they were pouring themselves into preparing for the race, many of these folks were also preparing for their first 5k.  They were inspiring.

The added requirement of raising money for Breast Cancer Research allowed us to share the journey with our family, friends and colleagues who ultimately tallied more than $2000 for the charity.  It just goes to show how very generous all of our friends and family are.  Wonderful people.

The Komen Race for the Cure is a tremendous confluence of purposes and I don’t know that appreciated that until I arrived at Meredith College on race day.  You have people who using the race to memorialize someone whom they loved and lost to this disease, you have survivors who are identified for all to see in bright pink t-shirts who are celebrating their victory, you have people who like myself were using the race as a type of yardstick against which I’d be measuring myself and you have people who participate out of a larger sense of community.  They would feel left out if they didn’t participate regardless of the cause.  Regardless of the motivation at 7AM nearly two thousand of us lined up to the run the competitive 5K. 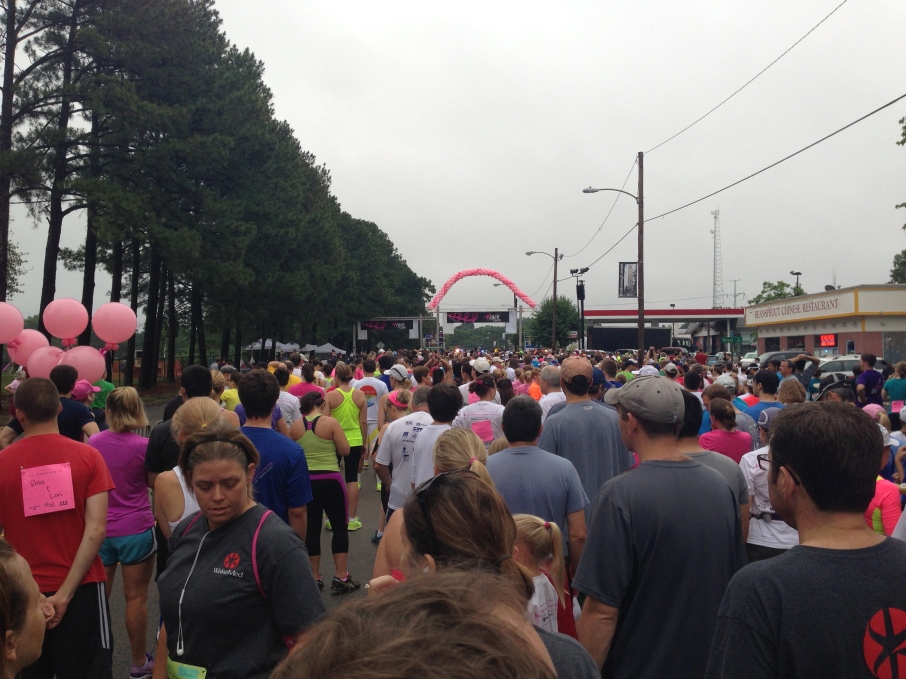 After the gunshot to start the event, I ran the first mile far faster than I had trained and ultimately out ran my endurance. The hills on the second half of the course further weighed on legs, but repeatedly when I wanted to slow down there would be a gaggle of well wishers standing on the sidewalks encouraging all of the runners to press on and finish the race, much like I imagine the friends who rise to encourage a woman who is diagnosed with breast cancer.

The temperature was not extreme but the air was thick with humidity. It sapped sweat from my pours. And just before the finish line I had the overwhelming desire to throw up having pushed myself through the hills and humidity, but with encouragement I finished.

I hoped that I could run the race in 36 minutes or less, but ultimately ran it in 39.08 (a personal best according to my Nike Plus running app). I was 88th in my age group and 1,479th overall out of 1,829. I’m proud of the fact that I finished the race and was very happy to do it with such a great group of people. 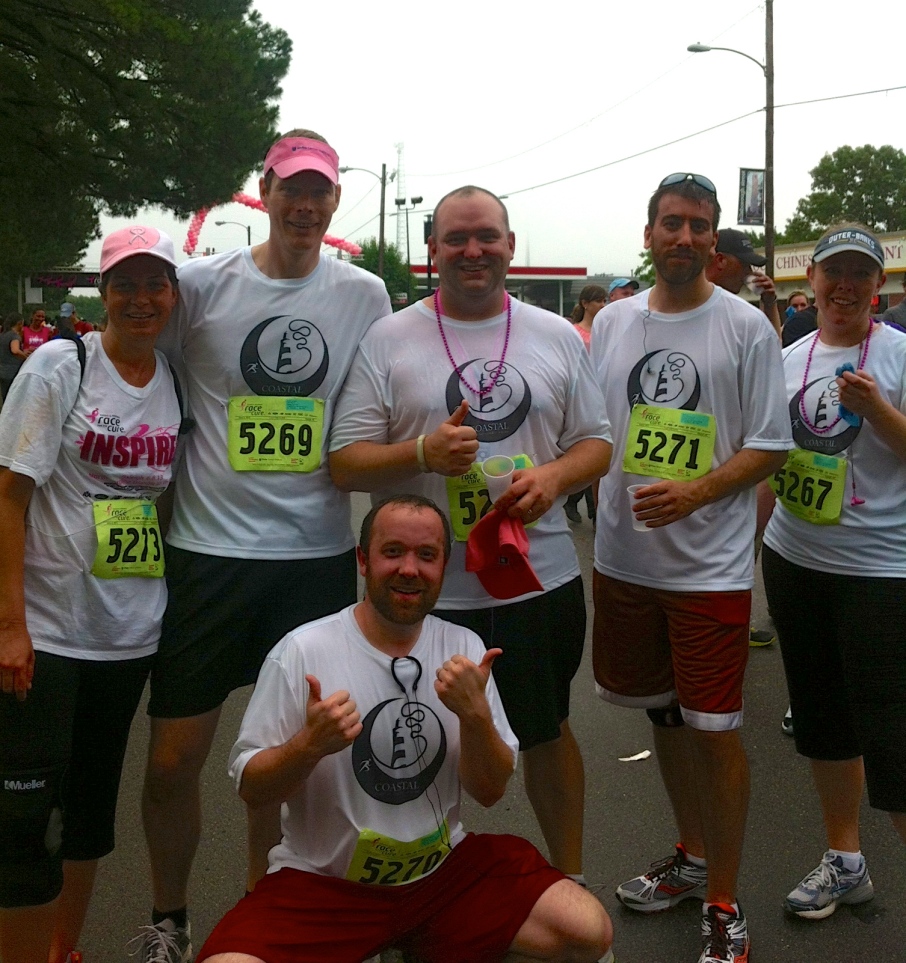 Following the euphoria of the finishing the race and spending some time thinking about my performance my thoughts haven’t been dominated by self-affirming resolutions about what I accomplished, instead my thoughts have been reviewing my diet, supplements and training regimen subconsciously developing a new program that will result in an improved result. I take that as a sign that running isn’t something I’m going to toss in the back of a closet like a pair of sneakers. And some how that makes me very happy!